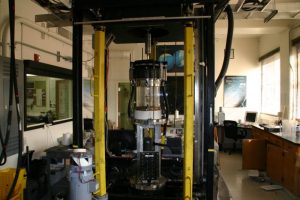 Graduate student Eric King has led the development of an experimental rotating magnetoconvection device (RoMag). Experiments made in RoMag are providing detailed characterizations of flow dynamics at nearly planetary parameter values and produce quantitative measurements of the flow fields that are believed to be critical components of planetary dynamos. The quantitative results will test several long-held, but unproven, tenets regarding the dynamics of convection occurring in planetary cores. The RMCD utilizes the recently developed technique of acoustic Doppler velocimetry to study convection in liquid gallium, which has material properties similar to that of the iron-rich planetary core fluid. The Doppler system allows us to quantify convective velocities in a thermally driven (< 10^5 W/m^2), large volume (6.2 L), right cylindrical rotating magnetoconvection tank. This set-up has the advantage of attaining an Elsasser number, the ratio of magnetic and rotational forces, that is close to one, as is estimated for the geodynamo. 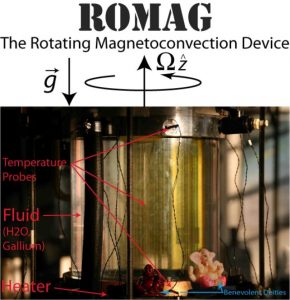 Quantitative velocity measurements in gallium are being used to test accepted theories about how the Elsasser number may control convection in the core. In addition to acoustic Doppler velocimetry, diagnostic measurements include thermometry and Hall probe magnetometry. Together these diagnostics provide a powerful, new platform for generating quantitative data relevant to the geodynamo and planetary core processes.
Funding for this project provided by the NSF Geophysics Program.